My experience of GR 20 “walk” in Corsica in a Nutshell 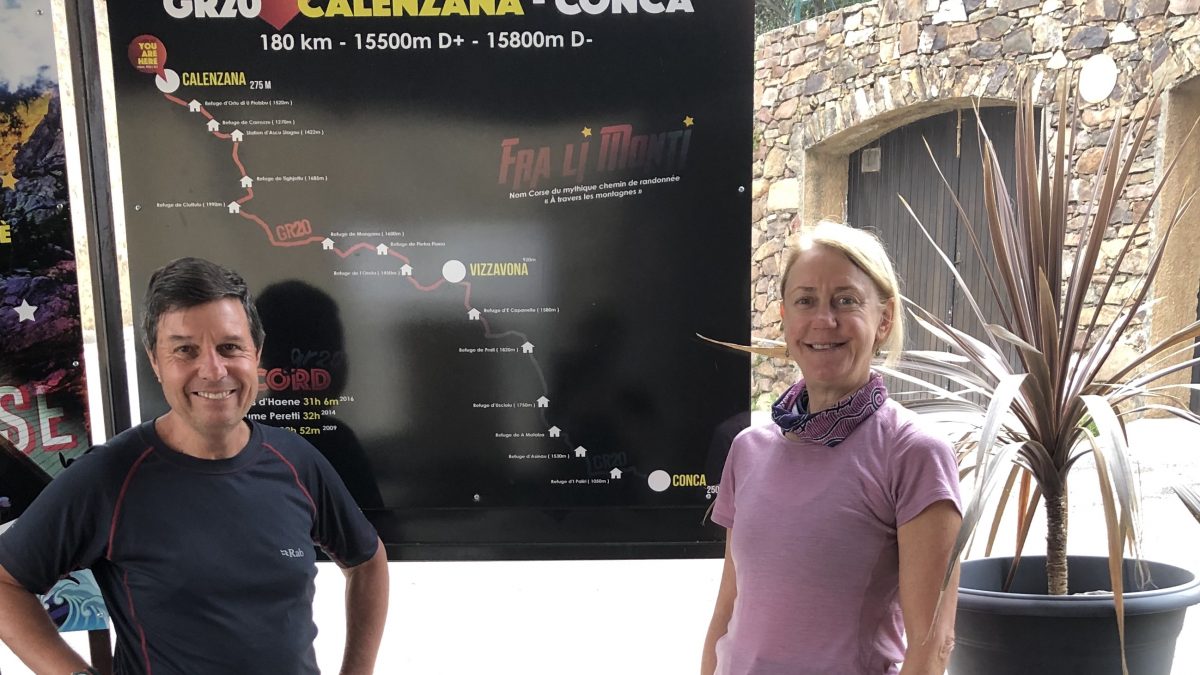 Tony and I decided to do this ‘Grand Rondenez’, a 195km challenging trek in Corsica (an island off the south coast of France) but we had no idea what were getting ourselves  into. Of course I agreed as I’m always up for a challenge, and had done many long distance walks before. It had been on Tony’s bucket list for around 25 years, but he’d been put off after seven people died in 2015 on a difficult stretch called the Circ de Solitude, after a small avalanche. But that bit has since officially been closed and all the cables, chains and ladders removed. It means the total distance has increased by around 15km, but there is now less risk of dying. Nonetheless, on average,6 people die on this trek each year (I assume from heart attacks, falls, exposure and the like). We heard the reassuring sound of the rescue helicopter every day.
Despite being a reasonably fit woman in my late 50s, had I known what was involved in this venture,  I would have seriously reconsidered, or at least done more intensive training. But nothing can truly prepare you for the GR20.
This trek over rugged mountains is considered one of the toughest trails in the world. We were amongst a handful of ‘older’ hikers – most were below 35 years of age, super fit and agile!
There are 16 stages between 6 to 19km in length, but with ascents and descents of a few hundred metres to 1.25 km each day (the downhills were almost as bad as the ups on the poor old knees). Don’t get fooled by the seemingly short distances – one 9km day took us over 12 hours as it was literally climbing up and down mountainsides, sometimes with chains and cables. Some fitter people double up stages, and some crazy fit people have run the entire distance in under 32 hours! How anyone could do this without breaking a limb or falling to their death is a mystery to me!
Some tour groups do bits of the walk (the ‘highlights’), some people just do the northern (more difficult) or southern section (still with some difficult days), but us 2 ‘over 58 years olds’ completed the entire trek in 15 days, armed with our bible – the Cicerone guide by Paddy Dillon. It took us 3 days to recover afterwards, and we were still fatigued for several days after that! 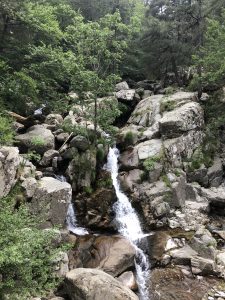 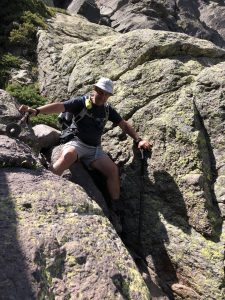 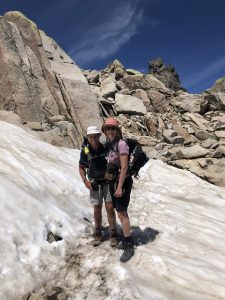 Most nights we ended at a Refugio where tents were pre-erected with air mattresses that were reasonably comfy so long as the rocks underneath weren’t too big or in the wrong spots. I was reluctant to stay in the refugio beds  due to a concern with bedbugs but once we had no option & stayed within the refuge – a big room with bunk beds and the comfort of being able to stand up while getting dressed. No bedbugs found us thankfully. 3 times we reveled in the luxury of a bed and breakfast or hotel – fully appreciating having our own showers and flushing toilets with seats and loo paper provided!
We carried very little food due to weight and space constraints leaving us victim to whatever was on offer for meals and the expense of dubious quality food that had mostly been helicoptered in, at great expense. Breakfast in the refuges ranged from fresh baguettes, jam and coffee or hot chocolate, to stale white or long life bread, jam and coffee.
Lunch ranged from a baguette with cheese or charcuterie, pasta or lentil salad with occasional fruit purée (baby food), or shared tin of Nicoise salad or pate and  leftover bread.
Dinners were a tricky thing – most of the ‘guardians’ (the Refuge Fuhrers) fed everyone at 7pm, and if you were late (which we often were) we either had to wait to see if there was enough leftover for us, or it was bad luck! We had brought a couple of freeze dried meals for such occasions and used them once. Once we scrounged several tables for leftovers but after tasting the lentil soup with Corsican sausage and fresh baguettes and  it was well worthwhile!
Vegetarians had less choice, and if you have coeliac or are vegan, BYO  food would be necessary.
We carried a thermos of herbal tea for morning and afternoon tea breaks, enjoying Corsican biscuits, chocolate or muesli-type bars, trail mix with nuts and lovely homemade chestnut cake a couple of times.
The hotels had more choice with meals, and we made the most of their offerings.
We met walkers from Poland, Holland, Britain, Sardinia, Lithuania, Czech Republic, USA, Germany, Ireland, Canada, one Australian and even a couple from Moldavia. Many people did not finish the entire trek due to illness, difficulty or time constraints (as they thought they’d breeze a 9km walk in a few hours but were shocked at the reality).
Highlights:
Low lights:
Comments from others: 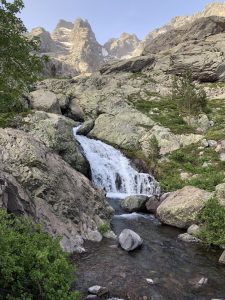 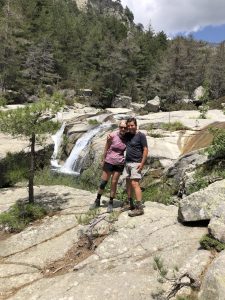 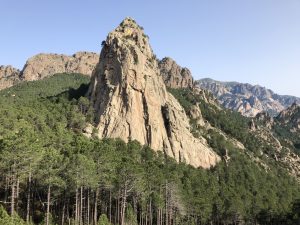 Top Tips if you are considering the GR 20

We are available online!

Due to COVID-19, All Degrees of Health will continue to move towards online operations. All Naturopath, Nutrition, Psychology and Hypnotherapy consults will occur via phone or video where possible.